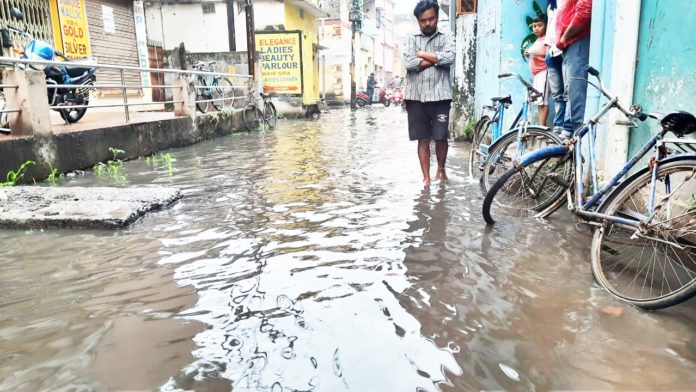 Cuttack: The honest taxpaying residents of Cuttack in the state even after the two decades of the rule of the Biju Janata Dal (BJD) government, led by a single Chief Minister Naveen Patnaik are forced to live in misery due to the apathy of the government towards providing them with basic amenities.

The residents of the city, which is barely 30 kms away from the state capital are now used to see waterlogged streets, pathetic roads, increased presence of mosquitoes, bad management of city drains on regular intervals. This state of affairs here hint at the massive failure of the Cuttack Municipal Corporation (CMC) and other state government organisations in ensuring basic amenities to the citizens.

A short spell of low intensity rain on Wednesday exposed the face of the CMC and the failure of their officials. Normal life was affected to a large extend by rainfall on Wednesday morning as some of the areas in the city were heavily waterlogged and people could not venture out for their offices, schools and other destinations. While Cuttack Municipal Corporation (CMC) claimed full preparedness to deal with the water-logging problem, reality proved to be different. 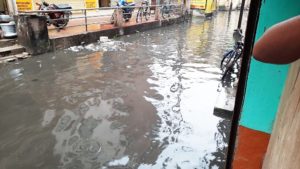 The low lying areas in the city were the most hit. Areas like Sutahat, Kazi Bazar, Alamchand Bazar, Bidanasi, Odia Bazar, Patapole, Buxi Bazar and others went under water. Due to the water-logging menace, vehicular movements were largely hit in the city.

“Water-logging in our area has gone from bad to worst. Few spells of rain make our lives miserable. Most of the areas in the city are under water,” said Dayananda Maity, a resident of Kazi Bazar.

“The CMC is responsible for the situation. No one looks into these important matters.” Akidananda, a under graduate student of Christ College said and added that she suffers going to his college with such conditions.

“Its been 20 years or more, I am seeing this place in the same condition. What the government is really doing I personally don’t know about it any more,” said Amit Ray.

“Health issues and mosquitoes are some of the greatest concerns in these area as drains are always open and water logging is a usual thing now for us. CMC has also stopped sending mosquito control spray trucks to this area,” Sumita Karmakar a house wife from Kazi Bazar.

People are now used to the government apathy and inefficiency of the CMC officials to curb the menaces. While the local bodies has allegedly failed in de-silting the drains, the ongoing JICA project to revamp the sewerage and drainage systems has damaged all city roads, making life difficult for commuters roads in and around Badambadi, Khan Nagar, Nua Bazaar and Nuapada in the east and almost all roads in central city are now water-logged.

Rainwater along with mud-filled drain waters have gushed into many households in low-lying areas, local residents pointed. Poor drainage system in the area causes such issues frequently, alleged the locals. The area is water-logged since many days for which people are finding it difficult to stand here and to commute.