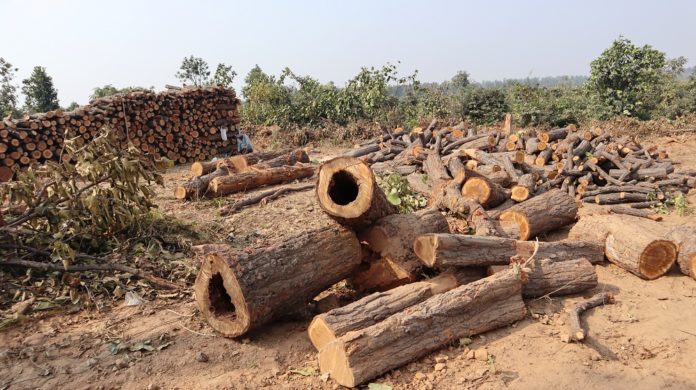 Till less than a month ago, a lush forest area in Talabira village in Odisha’s Sambalpur district was standing tall, with trees several decades old. The morning of December 7, 2019, however, marked the beginning of the end of this green expanse. As the winter breeze swept into the forest areas of Sambalpur district in Odisha, hundreds of personnel of security forces rushed in these areas, particularly near Talabira village. Local people said they had infact seen security personnel from Odisha police, Central Industrial Security Force (CISF) and others, parading the village roads near the forest areas, a couple of days earlier and guarding the gates leading to the forests.

The high security in this green patch in eastern India was to facilitate smooth, large-scale felling of thousands of trees and prevent any opposition. What is left now is an expanse of tree stubs that remain from the mass axing activity. Officials and labourers load the trunks of cut trees onto trucks to clear the forest for mining and claim that the cut trees are being taken away for transplantation.

In this area, an opencast coal mining project of central government-owned NLC (Neyveli Lignite Corporation Limited) is expected to come up. The company is reported to invest more than Rs. 170 billion (Rs. 17,000 crore) to produce 20 million tonnes of coal per year from the Talabira coal blocks to power 4,200 MW of its thermal power projects.

For the villagers who live in the area, the mass felling of trees in a matter of few days negated decades of their personal efforts and investments to conserve the resource-rich forest.

But as the news spread and activities for large scale tree felling began in the area in December, the worst fears of the villagers came true. The state government with the involvement of the Odisha Forest Development Corporation (OFDC) had started felling trees in the Talabira II and Talabira III coal blocks. Talabira, a revenue village consists of five hamlets – Budhia Palli, Munda Pada, Padhan Palli, Khatun Pada and Padar.

“We heard the sounds of machines cutting the trees. We also saw large logs of trunks stored in the forest areas but could do nothing. Many trucks also were seen on village roads taking the uprooted trees to other areas. Security cordon started five kilometres away from the site,” Hemant Rout, a villager from Khinda close to Talabira, told Mongabay-India.

He said that the commencement of the activities raised concerns about the fate of the villagers but the local administration did not come forward to explain much or allay the fears of the local community.

The villagers told Mongabay-India that parts of the forest that had been razed down had been protected over decades by the local Talabira Gramya Jungle Committee.

The current guard deployed by the local villagers said the government snatched from them the forest that he and the villagers protected from ages.

“It was a very old tradition. The villagers used to contribute three kilograms of rice per family to the forest guard besides some money. Before me, many other guards have guarded the forests. I have been protecting the forest for 18 years now from timber mafias and other threats. Without protection, the green cover could not have survived this long,” Achutya Budhia, the local guard, told Mongabay-India.

Thousands of trees to be sacrificed for coal

Talabira II and Talabira III are coal blocks near the Talabira village, allocated to the Chennai-based NLC, in 2016, for coal mining. In 2018, Talabira (Odisha) Mining Pvt Ltd (TOMPL), a subsidiary of Adani Enterprises Limited signed an agreement with NLC for being the developer and operator for the coal blocks.

The coal blocks lie close to the Sambalpur-Jharsuguda district boundary which is near the state highway 10, connecting the two district headquarters in Western Odisha. A total of 1,038.187 hectares of forest land in the Sambalpur and Jharsuguda forest divisions is planned to be diverted to pave way for the coal mining project.

According to the Odisha government, of the 1,038.187 hectares of forest land that is to be diverted for the project, 192.62 hectares lies in Sambalpur forest division while the larger chunk lies within the Jharsuguda division. Tree felling has started in Sambalpur while trees in Jharsuguda will be cut down in the next phase.

Though the local environmentalists claimed that more than 40,000 trees have been cut down till date (December 20, 2019), the officials refute the charge. According to an OFDC official, only 17,000 trees have been cut down, as of December 20. The target number of trees to be cut, as per the inspection report, is 130,721. The OFDC official, while requesting anonymity, claimed that the cutting process in Sambalpur district is now almost over.

While the initial tree felling in the Sambalpur forest division has created ripples among the local community and environmentalists, the large scale destruction of trees in the next phase in the Jharsuguda Forest Division is likely to generate more opposition.

However, the NLC India in their statement has claimed that to compensate for the tree felling at Talabira II and Talabira III, large scale afforestation will be taken up in addition to the rehabilitation of the aggrieved villagers.

“Our drive to plant and protect 25,86,700 trees inside and outside the mining lease area of Talabira II and III is higher than what is prescribed by the relevant regulations for protecting and nurturing the environment. Local plants such as Sirisa, Barakoli, Ambada, Mango, Jackfruits and bamboo will be cultivated to develop vibrancy in the ecology,” said NLC in a statement.

NLC also said that the aggrieved villagers will be compensated with pucca (permanent) houses and Rs. 1.34 billion (Rs 134.36 crore) will be deposited with the Odisha Compensatory Afforestation Fund Management and Planning Authority (CAMPA) account for further afforestation works in lieu of trees being cut for this project.

Sambalpur Collector Subham Saxena did not respond to Mongabay-India’s queries.

Officials and experts disagree on whether norms adhered to

While officials claim the felling activity is being done as per norms, legal experts who visited the site, claimed violation of official norms in tree cutting.

Sankar Prasad Pani, a lawyer with the National Green Tribunal (NGT), said that as per the government’s own admission they are using 30 tree cutting machines per day and each machine is capable of uprooting a tree within five minutes.

At these speed levels and the number of machines, the number of trees axed could be much higher than what is claimed by the government, said Pani.

He also hinted at a possible flouting of norms while felling the trees. “For felling of trees, the marking of trees is to be done (as per the Orissa Forest Act, 1972). But marking was not done as it was affected due to protests. It may happen that some trees which are not numbered are also cut. Law says stumps of trees should be there for counting process which was no more there. It was totally a level ground,” Prasad told Mongabay-India about his visit to the site after the felling of the trees.

Some villagers also claimed that in the haste of achieving the target in less time, the government agencies had also cut down trees from the private land. “We suddenly noticed big trees standing on our private land near the forest areas were also cut down. This means they are cutting the trees without properly marking them. To prevent this, many of us have now demarcated our land with boundaries,” said Tinku Budhia, a resident of Budhi Pani, on the periphery of Talabira forests.

Tribal rights activists claim that the forest has rich biodiversity and a threat to this could be disastrous. Tribal rights and livelihood expert Y. Giri Rao from Bhubaneswar said, “FAC (Forest Advisory Committee) mentions that more than 135,000 trees (1.35 lakh) would be felled. Out of total trees, 69 percent trees are of diameter more than 60 centimetres. It indicates the good health of the forest. Further, the report mentions that soil and regeneration health of forest area is good. The villagers have been protecting it since the 1980s. The village also got a certificate from the forest department for their contribution for the conservation of forests.”

The proposed site of Talabira II and Talabira III is next to the Ib Valley in the Jharsuguda district which has been identified as the “severely polluted area” as per the Comprehensive Environmental Pollution Index (CEPI) of the Central Pollution Control Board. Several extractive industries and coal mines are spread along its length. Ib Valley is said to be one of the most polluting industrial regions of Odisha.

As per the 2018 findings, it has a CEPI Index of 66.35, which is close to the levels of a critically polluted area. Environmentalists warn that such a project could add up to the already over-burdened area of Ib Valley and can potentially interfere with the ecology of the area.

“The establishment of a coal plant by destroying one of the large green patches close to the over-burdened industrial area is nothing less than a climate crime. The Mahanadi River close to the area is already over-burdened with the industrial demands. Even the people of Jharsuguda do not get piped water connection,” Ranjan Panda, an expert on climate change and river water issues from Sambalpur, told Mongabay-India.

He stressed that the forest cover (of Talabira) was one of the areas soaking the industrial pollution from the Ib Valley. “If you destroy it, it will surely overburden the water stress and will increase the heat in the industrial areas,” Panda said.

According to the project plan, the NLC is likely to start its mining operations from 2021.

(This story was first published on Mongabay India. Read the full story here. The story has been published on the theblink.in with due republishing rights)