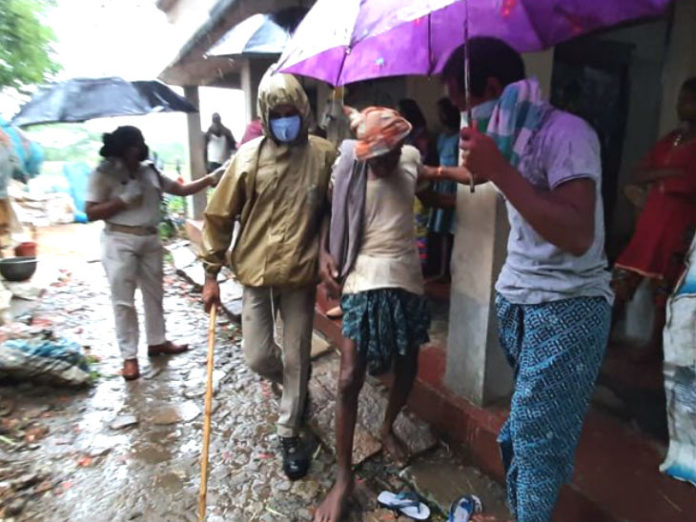 Bhubaneswar: The Odisha government on Wednesday claimed to have evacuated more than 1.37 lakh of its population till now in cyclone prone districts due to threats arising from cyclone Amphan.

Special Relief Commissioner (SRC) Pradeep Jena said that the state has evacuated close to 1.37 lakh people till now from the cyclone prone areas and shifted to them in 1704 cyclone shelter homes readied in 13 different districts of Odisha.

According to Jena the numbers of evacuations are likely to go up in the next few hours as a number of people have stated to rush in to these safe centers as strong winds and rains started to made their presence felt in different parts of Odisha.

The state since midnight had been witnessing surge of strong winds and  rainfall. According to the state government officials the impact of the cyclone is most likely to be felt in the northern coastal districts of Odisha which are close to West Bengal.

Odisha Chief Secretary Asit Tripathy on Tuesday night conducted a review meeting with the SRC and Collectors of the vulnerable districts and asked them to get prepared for the cyclone and ensure adequate timely evacuations and arrangements for food and other services.

The Chief Secretary and the private secretary of Chief Minister Naveen Patnaik VK Pandian early on Wednesday morning also visited the office of the SRC in Bhubaneswar and reviewed the real time movement of cyclone from its command centre in the office.

The state also claimed to have prepared its health units in advance to tackle with the cyclone aftermaths.

“We have instructed the district Collectors to ensure adequate supply of essential medicines and medical equipment in the light of the cyclone,” Pradipta Mohaptra, Additional Chief Secretary, Health department said.

He also said that anti-venom drugs are also been supplied in good amount to such districts as cases of snake bites often increase in cyclone hit areas.

The state however has already started feeling the heat of the cyclone which is developing into an extremely severe cyclone and moving towards the eastern Indian coasts.

The district administration of Bhadrak district already have shared pictures of heavy trees falling on the roads and blocking them after being uprooted due to string winds, triggered by the cyclone.

Paradeep in Jagatsinghpur district which also hosts one of India’s major ports have since morning witnessed strong winds which ravaged the region.

According to the metereological department wind speed upto 120km/hr was reported from Paradeep. The latest update claimed that the cyclone was close to 155 km away from Paradeep.

Special teams of National Disaster Relief Response (NDRF) have already been dispatched in districts like Balasore, Bhadrak, Jagatsinghpur and  Kendrapara which are on the northern coastal belt of the state and likely to be most affected by the cyclone.

The district administration however is taking special measures to distribute masks for people taking shelter in cyclone shelters besides trying to ensure social distancing and other norms when the threat of COVID 19 looms large in the state.

The state by Wednesday morning seen a total of 1052 cases of COVID 19 besides a total of 6 deaths due to the viral disease.

Odisha due to its proximity with the Bay of Bengal had seen several cyclones which claimed thousands of lives despite damaging properties worth crores.

Cyclones like Fani, Hudhud, Titli and others have claimed thousands of lives in the coastal areas of Odisha in the past.