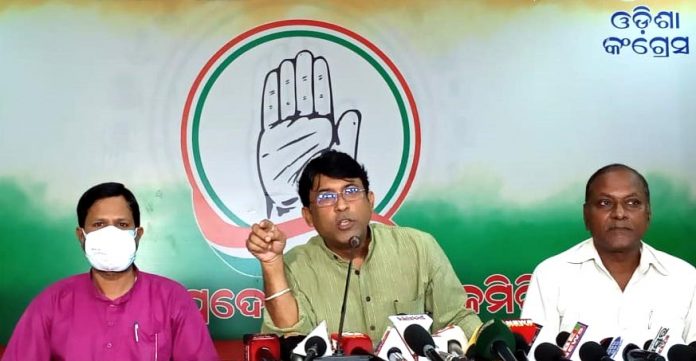 The Contractual Appointment Rule 2013-14 is a mockery of qualification and principle of equality for the millions of highly educated youth of Odisha. The decision of the state government to abolish regular appointment system and give contractual appointment to Grade C, D and some posts of grade B is unconstitutional and unwarranted alleged Odisha Pradesh Congress Committee (OPCC). Addressing a press conference here Satya Prakash Nayak, PCC media convenor, has alleged that the main intension behind the tainted Contractual appointment system is a huge annual scam of Rs 2000 crore.

In the last 6 six years the state government has given appointments to over 60 thousand candidates under contractual system. And it does not pay them full salary as per government pay structure. Though government employees, but they are paid consolidated salary without House Rent allowance or DA etc. In that way, it deprived each contractual employee of an average of rs 10 to 15 thousand every month compared to regular employees for the same posts and grades. In such a tainted system, the state govt actually defrauding sixty thousand employees to the tune of Rs 2000 crore annually, alleged Satya Nayak.

The Biju Janata Dal (BJD) leaves no opportunity to claim that the Naveen Patnaik led Odisha government is the best among all the states. If all those awards and accolades are based on facts then what was the necessity for amending the old regular appointment policy and starting a contractual pattern of appointment in various departments, asked Sri Nayak. Interestingly, When the Supreme Court and different High Courts have categorically mentioned that the contractual appointment system is unconstitutional and against the very principle of equality of opportunity, the state government’s decision to carry on the pattern is nothing but scandalous, said Satya Nayak.

In a similar case of the State of Karnataka Vs Uma Devi and others, the Supreme Court bench of Justice Y K Sabharwal, Justice C K Thakker and Justice P K Balasubramanyam has clearly said that ‘ any public appointment has to be in terms of the constitutional scheme.  The order further said that ‘ Regular appointment must be the rule’. The Odisha Contractual appointment rule 2013 is a clear-cut case of violation of honourable Supreme Court’s direction, said Sri Nayak. This a massive injustice to the educated youths of the state. They are being denied of their constitutional rights and due salary by the state government.

Now the big question is what the Naveen Babu government does with the thousands of crore rupees swindled from the  contractual employees, asks Satya Nayak. The money been deceived from the salary of the low-paid employees are actually spent on various popular schemes to create favourable opinion about Naveen babu and BJD to win the sympathy and goodwill of the people, said Sri Nayak.

That’s not all, on 25 May 2021, the office of the Labour Commission, Odisha announced the revised rate of daily wages for unskilled, semi-skilled, skilled and highly skilled categories of employees and labours. They revised the daily wage for highly skilled workers from Rs 458 to Rs 461 per day. The state government ran a costly ad-campaign in newspapers claiming Odisha pays the highest daily wages to labourers in the entire country. Interestingly, a B-tech, M-Tech qualified employee in the state government appointed under contractual system gets only Rs 8080/- which is much less than the daily wage fixed for highly skilled labourer. This is a shame on Naveen babu, who has brought down the standard of B-Tech, M-Tech qualified government employees below daily wage labours, said Sri NAyak.

The Pradesh Congress has demanded complete abolition of Contractual Appointment rule 2013. Instead demanded regular appointment in government posts. Till the decision is taken the contractual employees be paid salary as per the 7th Pay commission. Besides , steps be taken to regularize the outsourcing contractual employees deployed though various placement agencies. the government should give them salary on par with regular employees for the same work in the government. This a serious discrimination and violation of the principle “ Equal Pay for Equal Work” . demanded Congress.

Odisha villagers up in arms against Reds, kill Maoist in encounter