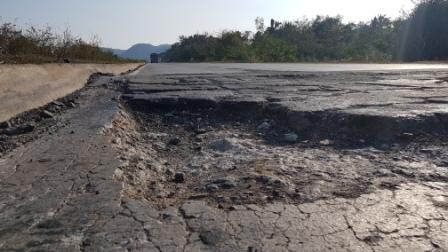 Bhubaneswar: Over speeding, not wearing of helmets and seat beats it seem are not the only cause of worry for the commuters who hit the roads to travel from one place to other. Data suggests that many precious lives are lost in the state due to the fault of the civic bodies and other agencies.

A recent data shared by the Union Road and Transport Minister Nitin Gadkari hinted that Odisha loses a life every second day due to road accidents triggered by potholes. The minister shared the data recently before the Rajya Sabha relating to road accidents, injuries and deaths triggered by mishaps caused on account of potholes on roads.

According to the data furnished by Gadkari, in Odisha in the last two years 2017 and 2018 a total of 238 road accidents were reported due to potholes. The data also hinted that with this calculation around one road accident is reported on every two days due to presence of potholes on the roads.

The same written reply by the government claims that a total of 108 people lost their lives due to potholes. Potholes could be termed as the living example of sheer government negligence when the agencies involved in road quality either delay in road repair or show negligence in repairing them making the lives of commuters vulnerable to accidents.

The data furnished by the ministry claimed that the presence of potholes also injured a total of 195 persons in the last two years. These data clearly hint that the negligence from the part of commuters is not the only reason for road accidents.

Such accidents also included mishaps reported on all roads either city roads, rural roads or the National Highways. The Centre however claim that special importance had been given to ensure safety of passengers and quality of National Highways.