Bhubaneswar: Hundreds of women with painted earthen pots on their heads joined the march to a venue in the outskirts of Gambharikhol, a village in Daspalla block of Odisha’s Nayagarh district. Each of the pots was full with the seeds collected from the kharif (rainfed cropping season) harvest of their heritage crops, indigenous landraces that have evolved in the region over thousands of years of agrarian practice and culture. The march was part of the annual seed festival, a celebration for the farmers of 18 villages who have revived the practice of growing indigenous crops. The seed-carrying women and men stepped to the beats of local drums as they marched to the venue to celebrate their harvest and exchange seeds to expand the family seed bank of indigenous landraces.

For Kainta Majhi, 45, of Kandha-Andharikutu village, this was indeed a celebration. After years of crop loss, she managed to harvest rice from her family land during the kharif season of 2019. “The seeds of high yielding variety (HYV) crops supplied by the government, which are what’s available in the market, couldn’t save us from regular crop loss. So I grew our traditional rice crop, Jhumpuri variety, this year. And, I am happy that I got a good harvest with less investment. Many farmers had to face crop loss last kharif due to erratic rain and water scarcity.”

According to the farmers, as this part of Odisha is a hilly tract, crop loss due to water scarcity, dry spells and drought-like situations have become a regular affair over the past few decades.

The disillusionment of HYV seeds

In order to ensure more yield, the government provides high yielding variety seeds to the farmers. But, farmers found these seeds to be highly sensitive to the climate with less ability to survive even minor climatic disturbances. “We face a dry spell if there is no or scanty rain in the beginning of the season; the stem of the plants rot if there is more rain causing water logging in the fields in the middle of the season; in a drought-like situation they all wither in the field. In any case, the farmer repeatedly is the loser,” Purna Chandra Pradhan, 47, a farmer from Barapalli village, told Mongabay-India.

According to analysis by various experts, HYV seeds, which entered Indian fields during the green revolution, are less resistant to droughts and floods and need efficient management of water, chemical fertilisers, insecticides and pesti­cides.

Living in upland regions, most farmers of the region depend solely on rainwater for all agricultural activities. “Initially, for 2-3 years, the hybrid or HYV seeds gave us good production though demand for chemical fertilisers increased year by year. Again, these crops attracted more pests forcing farmers to get chemical pesticides from the market to save their crops. So, every year the farmer had to spend more to grow such crops,” said Rabindra Mallick, 55, of Jamusahi village, who had seen the introduction of HYV seeds in the area around 40 years ago. “Over the  last few decades, with erratic rainfall  and changes in weather patterns, production has dropped and become uncertain with more years of crop loss despite required investment on labour, fertiliser and pesticides.”

Studies substantiate that overuse of chemical fertilisers to get high yield causes physical and chemical degradation of the soil by altering the natural microflora and increasing the alkalinity and salinity of the soil. The higher yield comes at a huge socio-ecological cost such as environmental pollution, biodiversity loss, increased vulnerability to climate change, land degradation, erosion of traditional agricultural knowledge and decline in human health and livelihood.

With the impact of climate change and disturbed weather system, farmers’ hopes to recover the loss of the previous year gets shattered every time, and is a significant financial burden. “Even the local forest and ecosystems are so degraded that they are unable to deliver the expected services to support the survival of these people in times of such distress,” observed Niranjan Jani, primary school teacher at Mardabadi village.

Moved by the situation, elderly farmers thought of abandoning HYV seeds and returning to their own traditional seeds. “But, by this time, these farmers had already lost most of the indigenous seeds. Somehow, we and the farmers together could collect over 50 varieties of indigenous paddy and grams seeds,” said Prasant Mohanty, executive director of Nirman, a non-profit organisation working on sustainable agriculture and human-environment systems.

The seeds were distributed among the farmers of 18 villages of this area initially to grow during the 2019 kharif season with the objective of conserving local landraces, restoring soil quality and local ecosystem. “The tradition of exchanging indigenous seeds has become a part of the seed festivals observed by the farmers,” Mohanty added.

Cultivation of indigenous crops has the potential to make agriculture climate smart, genetically diverse and sustainable. “The most important benefits of local landrace crops are their field resistance to different prime pest and diseases; they are highly adapted to the climatic conditions of the land. Responsive to organic methods of agriculture, these crops are resilient to disturbed weather events and climate variability,” said Debasis Mishra, senior scientist and head of Krishi Vigyan Kendra (KVK), Kandhamal. 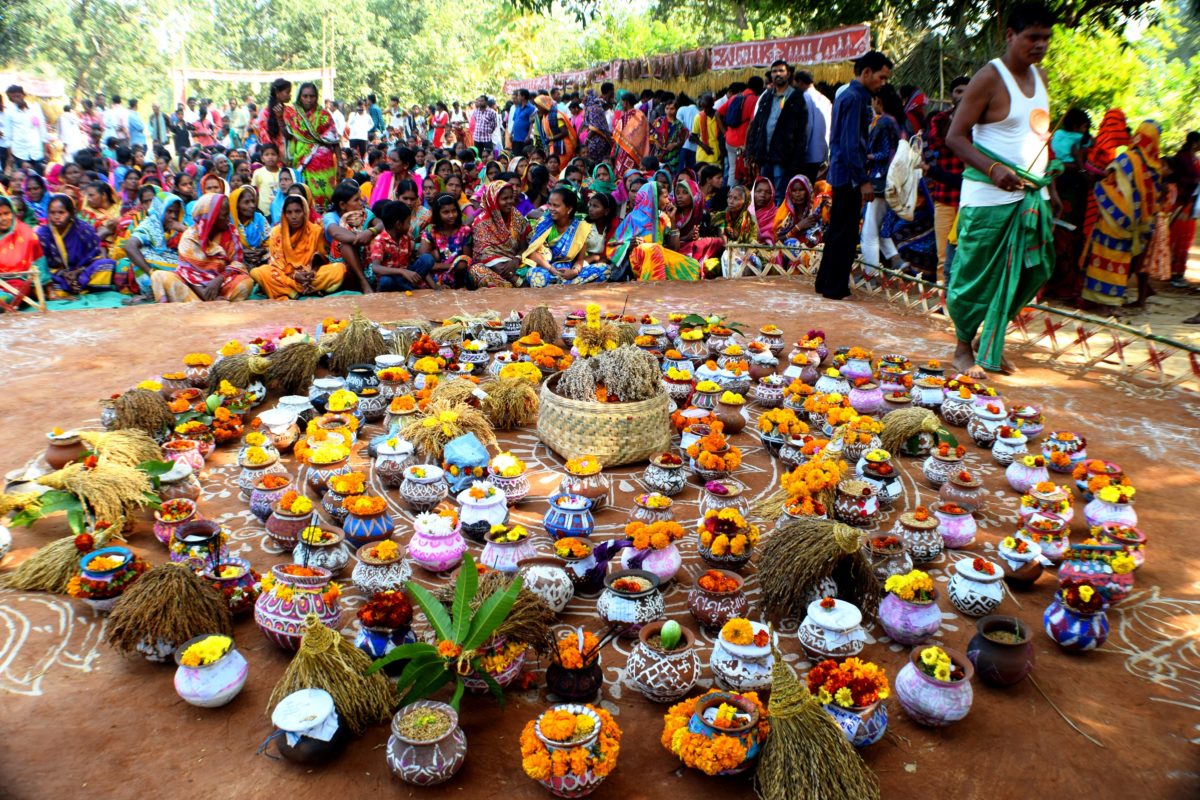 Disillusioned with the government-supplied hybrid seeds, tribal communities of Kandhamal district’s Tumudibandh block have returned to indigenous varieties of paddy, millets, legumes, tubers and vegetables since the last five years.

Talking about the reason of shift to local landraces, Dambarudhar Majhi, 70, a tribal farmer from Kutia Kondh community of Dupi village explained that “hybrid or HYV seeds supplied by government agencies didn’t suit to our soil. Birds and other insects predating on pests didn’t visit our fields. As new pests started emerging in the fields, the plants didn’t grow well and the production either failed or was too less to meet our basic needs.”

While the tribal communities were resistant to apply inorganic fertilisers and pesticides for better yield, the traditional organic practices didn’t work well with the hybrid seeds. As observed by Bata Majhi, 60, a woman farmer of the same village, “HYV seed cultivation also hampered growth of tubers and other traditional food crops in the same fields. Instead of getting better yield, we rather faced food shortage. Even, availability of leaves, fruits and honey in the adjacent forest also reduced,” she highlighted.

Recalling his experience in 2011, Mohanty said, “Most of the local landraces were lost when we first visited the area for research. Then we thought of mobilising the tribal farmers to revive indigenous crop cultivation in Kandhamal. The tribal people appreciated our idea and led the process of change.”

“There was no other way but to shift to our own varieties of seeds and traditional agricultural practice because the hybrid seeds were the main culprit behind all our miseries,” Mathura Patra, 65, a Gond tribal woman of Kaobali village, argued. “Apart from variety of traditional millets and maize, we grow our own paddy varieties named Kundha dhan, Kala dhan, Bhataburai, Surukulinga etc. in the upland fields.”

Over 1000 farmers spread over 50 tribal hamlets of the block are now growing about 100 varieties of indigenous food crops by adopting their traditional organic and crop diversification methods. “The only change they have brought to their traditional practice is line-sowing method for paddy and millet crops,” said Suresh Chandra Bisoyi, director of Nirman’s programme promoting cultivation and conservation of local landraces of crops. “We also support them with de-husking mills for millet processing and marketing of their farm produces to boost their income,” he added.

While these tribal farmers of Kandhamal have successfully evaded crop loss due to climate change and weather disturbances, they are also content having conserved about 200 varieties of indigenous seeds of paddy, millets, maize, vegetables and pulses. Every year, they exchange new collections of seeds among themselves to increase the number available with specific communities.

This apart, the surrounding forest and environment has regained its health. “We get fruits, tubers and leaves from the forest as before. Honey bees and butterflies have returned to our villages enabling each of our families to consume at least three liters of honey a year,” said Praneswar Majhi, 55, of Dupi village. Happy with the revival of their agrarian practices, the tribal farmers of Kandhamal now openly claim that their own traditional crops, which they abandoned for years under illusion of hybrid seeds, have brought richness to their communities again.

Appreciating the reintroduction of local landraces of crops by the tribal farmers, Mishra of KVK, Kandhamal, observed that such practice if expanded can relieve farmers from the current distress, help conserve local landraces, and change the food production scenario. “However, it needs expansion gradually in a phased manner by ensuring adequate protection and infrastructural support to the farmers,” he emphasised.

The story was first published on Mongabay India.