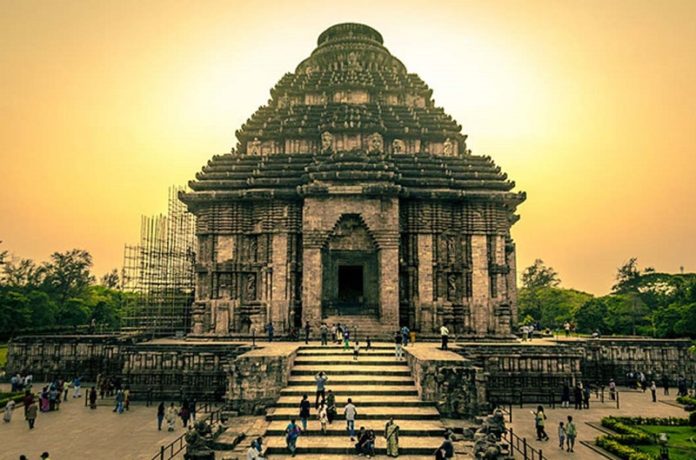 Bhubaneswar, March 2: In the light of the two-day workshop being conducted at Konark on the February 28-February 29, the sheer negligence of the Archaeological Survey of India (ASI) in handling the affairs of the temple has been exposed, opine conservationists.

ASI, the chief government guardian of the archaeological heritage of the country had recently patted itself on its back, with the statement that the entire scaffolding around the temple has been removed. While removing the scaffolding on the eastern side of the temple, a statue was alleged to have been damaged.

The knee of the five feet Maithuna Couple was damaged and a large portion was chipped off. The chipped off piece can be easily re-fixed, but due to the negligence of the ASI, the piece has not been kept. The damage is clearly visible from the ground level. There were earlier instances too where such mishandling had resulted in damage to fine sculptures. It has repeatedly been brought to notice of the ASI that semi skilled workers are being used for the workings.

Earlier, on May 21 2019, the ASI has apologized to the Jagannath Temple administration for the damage caused to its lion statues during cyclone Fani. In that instance too, the iron scaffolding, put up by the ASI around the temple had fallen on the lion statues when the cyclone hit Odisha. There were allegations that the scaffolding fell due to the ASI’s negligence.

The Union Minister for Culture had announced in the conference during his last visit to Odisha that the future restoration plans for the Sun temple will be drawn up by attending archaeologists, engineers, and other experts.

The last Conference held to carry out an assessment of structural stability was in 1997. Foreign experts had been roped in, but no action has been taken. The matter of the sand inside the Jagamohan, which has compacted to a level which is 17 feet below the roof, and the lateral thrust on the structural walls, has been a matter of concern.

According to Anil Dhir, General Secretary of the Konark Surakhya Samiti, the ASI and Government of Odisha should take the active participation the local stakeholders when deciding the conservation and restoration plans. Dhir, who was present during the meetings, held in 1997, 2010 and 2019,  said that none of the recommendations made in these meetings were implemented.

In December 2019, the then Union Culture Minister, Mahesh Sharma had categorically stated that there was absolutely ‘no threat’ to the world heritage structure in Odisha. At the high level meeting held at Bhubaneswar on the 10th December, the expert from the Central Building Research Institute, Roorkee too had certified that there was no threat to Konark Sun Temple. The Konark temple’s world cultural heritage status certainly demands that the structure be given immediate attention.