Odisha witnessed the strike as part of the Bharat Bandh call given by the left parties, trade unions and others outfits. Following are the top 10 developments that took place in the whole day in Bhubaneswar and Odisha at large. 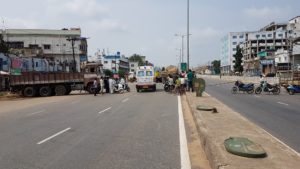 According to rough estimates, around 2,000 private buses remained off the road on Wednesday. Private bus operators on the eve of the strike had announced keeping their buses off roads citing security reasons. Buses were hardly seen plying on the city and state roads.

The East Coast Railway (ECoR) claimed that at several railway stations like Bhubaneswar, Berhampur, Keonjhar, Puri, Balasore and others agitators blocked movement of trains to mark their protest. The railway department claimed that 17 trains were detained or diverted due to these blockages.

Around 500 protestors are said to be detained by the police for protesting on the roads. Several of them were detained when they tried to move closer to the Odisha Assembly from the Master Canteen Square in the state capital. Many trade union leaders and political parties leading besides the normal agitators were detained and taken on buses by the police to sites away from the troubles zones.

Major commercial establishments like shopping malls remained closed in Wednesday fearing attacks or vandalism during the strike. However several smaller shops remained open as not much impact of the strike was felt at the interior areas of the state and even in state capital.

Bhubaneswar Deputy Commissioner of Police (DCP) Anoop Sahoo claimed that protesters who moved on the city roads on bikes without helmets would be traced and fined as per the law. He said CCTV footage will be used for the same.

At many places in Bhubaneswar, the traffic cops were found to be absent on the traffic posts leading to uncontrolled management of the traffic vehicles. However the traffic personnel were seen at Rajmahal Square, AG square and other areas.

Most of the protesters remained confined to the Rajamahal Square, Master Canteen and close to Odisha Assembly in the city where they tried to made their protest visible. Tight security cover also kept a vigil on their movement leading to detention of the protesters finally.

Several trucks were seen stranded on the National Highways (NHs) crossing Odisha as the Bandh affected their movement along NHs. The NH-16 close to Bhubaneswar, NH 143 and 215 close to Sundargarh, NH 26 near Koraput and NHs connecting Mayurbhanj were seen hit by the bandh and trucks remained stranded there.

The Odisha BJP on Wednesday criticized the bandh in the state and termed the communist parties are professional protesters. BJP leader Prithviraj Harichandan said that the left parties wanted to relevant to present day politics and thus they resort to such strikes for the purpose.