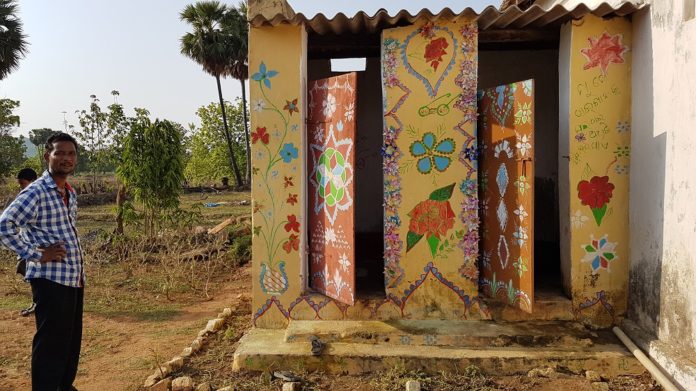 Bhubaneswar, Mar 4: When the ambitious Swachh Bharat Mission was launched by the Union government way back on October 2, 2014 to target the practice of open defecation in the country Odisha had a bad track record and one among the few states in the country with the lowest sanitation coverage.

According to the statistics of the mission, Odisha had the sanitation coverage (measured as the number of household level toilets) of merely 11.74 per cent which means out of 100 households in rural Odisha, only 11.74 had their own toilets at their home.

Taken on a mission mode, special teams were formed, guidelines were framed by the Ministry of Drinking Water and Sanitation and states were given the liberty to come out with the plan to combat open defecation, bring behavioral change among the citizens and persuade them to use toilets while ensuring the toilet construction with an incentive of Rs 12,000 per household is given to them for toilet construction.

The changes started cropping up with passing days. At present as per the latest information, Odisha has 100 per cent toilet coverage and an ODF state, five years after the commencement of the mission. According to the project implementing agencies and state government the local level change makers were the swacchagrahis, many of whom were women, anganwadi workers, ASHA workers besides the project coordinators in district who swung into action to bring the change on the ground.

We took a sneak peek at the spree of the transformation which brought the tangible changes on the ground. Several innovative ideas seemed to be behind the change in the overall situation.

Take for example the Lulang panchayat of Deogarh district in the Reamal Block. This block under this ODF district started with an innovative idea of painting the outer walls of the toilet to attract the children and citizens towards using it. The resident of the villages under this panchayat also tried to ensure good hygiene around their toilets as they also started growing flowering plants to ward off any odour to add beauty to the place, once considered ‘not pure’ by many.

It all started as a campaign under the name of “My Toilet Campaign”. While initial experiments in some villages in the panchayat proved futile soon it got impetus. It got its success after an anganwadi worker in the Similiguda village in the Lulang panchayat started drawing paintings of flowers on her toilet. It soon caught the attention of the kids there.

“It attracted the kids and they got accustomed to using toilet and the behavioral change started taking place. Soon, the whole village adopted this and later several others villages in the panchayat bolstered by the experiment started adding beauty to their toilets,” said Kumuda Satpathy, a former consultant under the Mission in Deogarh.

According to the ground implementing workers, they chipped in to create awareness on the harmful effects of open defecation and the benefits of using toilets and maintaining sanitation on their village. The villagers soon started feeling the difference in terms of the number of diseases hitting the kids in the area and also reduced were the quantum of mosquitoes and flies thronging the village.

The village however also went ahead and started installing concrete dustbins which was also aided by the local government. The village soon developed the etiquette of using only dustbins to throw garbage even to the extent of small piece of paper to used chocolate wrappers.

On the other side in Ganjam which was known for rampant open defecation on the street corners and having developed the infamous practice of “Ganjam Salute” where people defecating in the open on the streets sides stand up once vehicle lights flash on them also started showing change.’

According to the latest figures, Ganjam has 90 per cent sanitation coverage and not an ODF district yet under the Swachh Bharat Mission but it is also experimenting a new idea which however has also witnessed some minor opposition. The Collector office of Ganjam last week boasted about their new innovation to combat open defecation in their area.

The district administration and the Rural Sanitation Division of the district now is experimenting with the idea of using Rangolis and Tulsi (basal) plants to dither the erring citizens who are into open defecation. The women of the areas have especially been chipped in.

Women in many vulnerable areas are now coming onto the streets cleaning the street corners, drawing rangolis and planting Tulsi plants to discourage people who practice open defecation and shun toilets at their houses.

“The idea was to boost the practice of using toilets. We used awareness camps and other sessions to take people onboard. We also pitched in women through persuasion with the women swacchagrahis and then eagerly participated.They made rangolis and placed tulsi plants on the streets,” Gokul Maharana, District Project Coordinator under the Rural Sanitation Mission said.

The experiment has become a talk of the town in Ganjam. Several other districts in Odisha have now buoyed by the success of such experiments started pondering over coming up with innovative ideas to fight the menace of open defecation so that the state could be made Open Defecation Free before the slated deadline.

The Ministry of Drinking Water and Sanitation, the nodal ministry at the Centre who is undertaking the Swachh Bharat Mission (Rural) in India had earlier claimed to make Odisha an ODF district by the end of December 2018.

According to the guidelines of the Swachh Bharat Mission after a district becomes ODF, another level of works under ‘ODF Plus’ activities start where focus is given on ensuring water supply, solid waste management and other community participation activities.