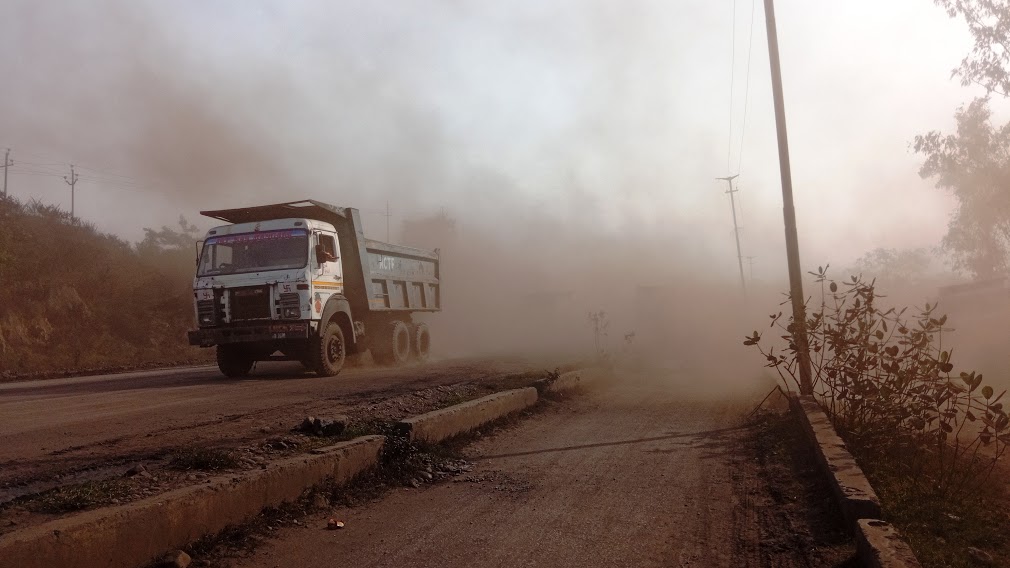 Chhendipada area in Angul district of Odisha is marked by large patches of green cover comprising forests of large tree species like Sal and others. The forest department has also installed signboards at several areas on the Angul-Deogarh road crossing through Chhendipada, warning (and also certifying) the travellers that these forests host elephants.

Notwithstanding the rich flora and fauna it harnesses, this zone, adjacent to the Bamur Forest Range, is also rich in coal reserves and falls under the Talcher coalfield. Talcher coalfield is known to be India’s largest repository of coal and often referred to as the ‘black diamond’ of the state.

The coal from Talcher is supplied to southern and western Indian states for power generation. The central government and the Odisha government are now working towards developing rail lines between Talcher with Paradip port in Odisha to boost its transportation to other states via sea-route.

In June Prime Minister Narendra Modi launched the auction of 41 coal blocks of India to boost the economy that was impacted by the coronavirus outbreak. Of the 41, nine are from Odisha and of those eight are in Angul district alone and fall under the Talcher coalfield.

All these coal blocks like Chendipada I, Chendipada II, West Radhikapur and others are almost adjacent to each other and pose the same threat to the rich biodiversity as well as to the farming land which may soon be destroyed. But the question is whether the transition will lead to any improvement in the lives of the local people.

“The soil of Chendipada is fertile while it also has a good quality of forests. It also has a good population of elephants, deer and wild boars. Chhendipada landscape comprises farming as well as forest lands. Due to the coal mining proposals, the greenery, human habitations are likely to vanish from the area like the other big mines of Talcher,” Dilip Sahu, a resident of Chhendipada and district president of Odisha Jungle Manch of Angul district, told Mongabay-India.

“Some people are raising their voice against coal mining and many are likely to give away their land and villagers to the mining firms and government due to the better prices of the land given for the prized land. This area has already seen serious opposition from people for some coal blocks like Machkatta for which the mining firm had to backtrack,” he said.

Forest clearance related documents of the Union Ministry of Environment, Forest and Climate Change of an auctioned mined claimed that the region is home to plant species such as acacia, bahada, barabakulia, mahul, teak, neem, eucalyptus and 15 other species.  The vegetation there is classified as tropical moist deciduous forest type.

Villagers of Chhendipada said that by the virtue of the underground coal reserves and anticipation of land acquisition, the land prices in the area have gone up. Janaki Sahoo, a villager from Barpada village said that land is an important wealth now for the villagers.

“In the past few years, we have seen an escalation of prices of the land here. Several people bought land there due to the rich coal repository. Several middlemen emerged into the area and land became a new wealth for the people of Chhendipada,” Sahoo told Mongabay-India.

Read more: [Video] Is mining in India ‘just’ for the environment and communities?

Government to acquire a huge tract of land

With the learning from the earlier experiences of coal mining in Talcher, villagers expect a large number of villages, farming land, forest lands to be taken away by the government and the mining firms to pave way for the excavation of land for coal mining. Most of the opencast coal mining planned for the area is set to degrade the topsoil by drilling and causing massive in-depth blasting of the mining zone.

Close to 32,000 acres (130 square kilometres) of land including 1,384 acres of forest land in the nine coal blocks in Odisha have been chosen for allocation for commercial mining. Experts claim that close to 15,000 families are likely to see displacement from their original place due to the mining activities when the land would be acquired from them. They also raise questions of the vanishing of local canals and adding pollution burden to the nearby Brahmani river.

“Most of the coal blocks are located in densely populated areas fearing displacement of at least 15,000 families. The government’s own data shows that many small streams and nallas like Shingada, Goudani, Tikira, Gambhari which used to feed the local agricultural land and the nearby rivers will vanish for all time to come and have an impact on the major rivers like Brahmani,” Sankar Prasad Pani, a lawyer at the National Green Tribunal (NGT), told Mongabay-India.

Experts point to the impact that the proposed mining can have on nearby water bodies.

“Brahmani River is the most polluted river in Odisha which passes through Angul district and the prime reason for this is coal mining. The new proposed mining in nine new blocks will add to the water scarcity in the region. A number of local streams draining into Brahmani are most likely to be lost forever into the mining areas, affecting the water availability and quality of water of Brahmani,” Ranjan Panda, a water  expert from Odisha, told Mongabay-India.

He said that at a time when India committed towards promotion of renewable energy in the Paris Agreement, it should refrain from relying largely on coal for energy. “Coal mining has serious implications on the groundwater levels, local water bodies and the ecology. It paves the way to make the region water-scarce besides its potential to cause air pollution,” Panda said.

Lessons from the past

At present, there are 10 coal mining projects undergoing in Talcher. Many of the projects were expanded by fully displacing several villages.

For instance, Rakash village in Angul district is another village which is now all set to be engulfed into coal mining. Land acquisition is almost done and full partial payments have also been made.

70-year-old Ishwar Chandra Bagata from the Rakash village said, “We are going to be displaced to a village named Bolepur.”

“We have heard that plotting of the new area has been done. We will soon be displaced to the other village due to the expansion of coal mining activities. Most of us have received compensation while few are yet to receive the second instalment.”

Several villages in the past in Talcher have been fully taken over and razed for mining displacing thousands of original inhabitants of the area and the expansion spree is still continuing in India’s largest coal reserve zone. Many of them have been shifted to new areas with the promises of better amenities, compensation for land and houses.

Read more: Multiple phases of mining in Ballari take a toll on its people and the environment

In addition to coal mining activity, the complementary industries and units like rail siding (where the coal is loaded into trains), coal washeries and others also add much air pollution and make the lives of people living nearby miserable.

Chotiahati village in South Balanda, which is close to the railway siding in Talcher, suffers serious air pollution. Thousands of trucks loaded with coal but uncovered move around the village throughout the day and thus there is always a cloud of black dust.

“A lot of dust is created due to the movement of trucks loaded with coal as most of them are uncovered. The mining company is sprinkling water on the roads but due to regular movement of trucks, the water gets dried very fast creating a dark black cloud of coal dust throughout the day,” complained Mangal Gagarai, a resident of the Chotiahati village.

The village is inhabited by incoming migrants and the tribal population of Ho community. It comprises several kuccha houses and unpaved roads. Dust from the railway siding settles down on the roofs of their houses. Several villagers complained of breathing issues due to air pollution, a consequence of mining activities at Talcher.

Not only air pollution, but contamination of water is also visible in the area. Tentulei is another village in Talcher which bears the brunt of mining-related activities. The villagers explained to Mongabay-India that how fertile land in the village is ruined due to the blackish industrial waste effluent coming out from the nearby coal washery that enters their agricultural fields and village lands and ponds, polluting them with toxic water.

Studies conducted in the region have hinted towards a heavy toll that the coal mining has taken on the human population, especially their health and livelihood.

A study on Talcher coal mining by a team of National Institute of Technology (NIT), Rourkela and financially supported by the NITI Aayog claimed that though the mining activities boosted the economy it forced the population there to live in a highly polluted environment. It also highlighted that many farming lands were taken for mining and it was the landless villagers who suffered the most.

The government officials claim that they are taking adequate steps to control pollution in the district especially in mining-affected areas. Siddharth Shankar Swain, who is the Collector of the Angul district, told Mongabay India that the district administration had been ensuring that all trucks plying on roads are covered on top, their wheels are washed during exist points and water is sprinkled in the mining-affected areas regularly.

“We also undertake discussions with the State Pollution Control Board (SPCB) and other stakeholders on how to reduce pollution in the area. In the next meeting of the District Mineral Foundation (DMF), I have made discussing pollution mitigation as an important agenda for the meeting,” he said. He, however, added that for the new coal block allocations not much work has started now but the socioeconomic survey of some of the areas would start soon.

This story first appeared on Mongabay India. You can read the original story here.